We'll go into this one in depth - so please keep going!!

​​​​
THE GREAT TRIBULATION HAS AN END!
(4 Signs that happen at the Immediate end of the Great Tribulation)

Matthew 24:29-31 29. "But Immediately after the tribulation of those days, the sun will be darkened, and the moon shall not give her light, and the stars shall fall from the heaven, and the powers of the heavens shall be shaken.
30, And then shall appear the sign of the Son of man in heaven; and then shall all the tribes of the earth mourn, and shall see the Son of man coming in the clouds of the heaven with power and great glory.
31. And He shall send forth His angels with A GREAT TRUMPET​, and they shall gather together His elect from the four winds, from one end of the heavens to the other."

Revelation 6:3-4​ 3."And when He (the Lamb) opened the Second Seal, I heard the second living being saying, Come.

4. And another, a red horse came forth, and was given to the one sitting on it power to take peace from the earth and that they would slay one another; and a great sword was given him; 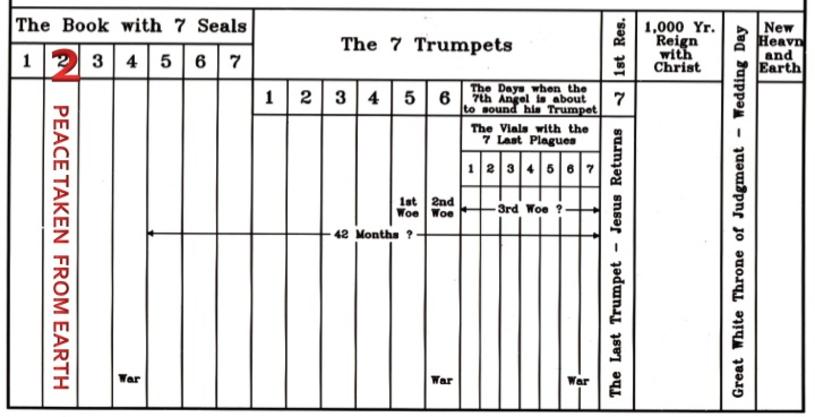 ​Please feel free to listen to this AUDIO, and as you do, scroll through all the notes and sketches below, as there will be additional information, not always covered on each radio show. 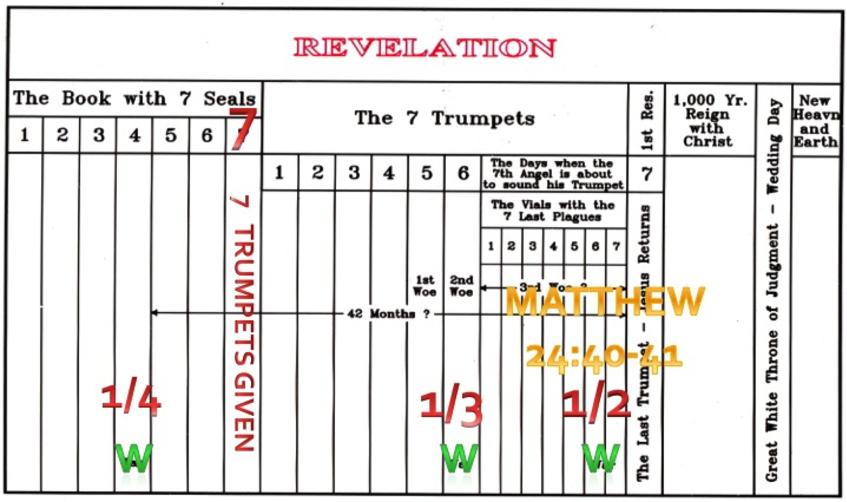 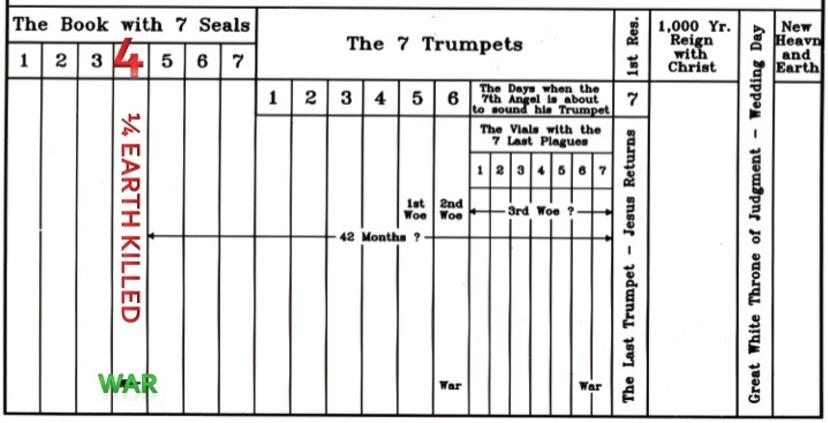 But, ​when are the 7 Trumpets given?

Revelation 8:1-2  1. "And  when He (Jesus) opened the 7th Seal, there was silence in heaven for about half an hour.
2. And I saw the seven angels that stand before the God; and Seven Trumpets were given them."

Let's look at the Opening of these 7 Seals

Revelation 6:5-6 5."And when He (the Lamb) opened the Third Seal, I heard the third living being saying, Come.  And I saw, and behold, a black horse; and who sat on it had a balance in his hand.

6. And I heard as a voice in the midst of the four living beings saying, a quart of wheat for a days wage and three quarts of barley for a days wage, and don't hurt the oil and the wine.

​The 7 Trumpets are not yet given to the 7 Angels to Sound until the 7th Seal has been opened.  Then they are given and then, and only then do they begin to sound.  They will sound one by one, in order.  Jesus does not return until the 7th Angel Trumps! 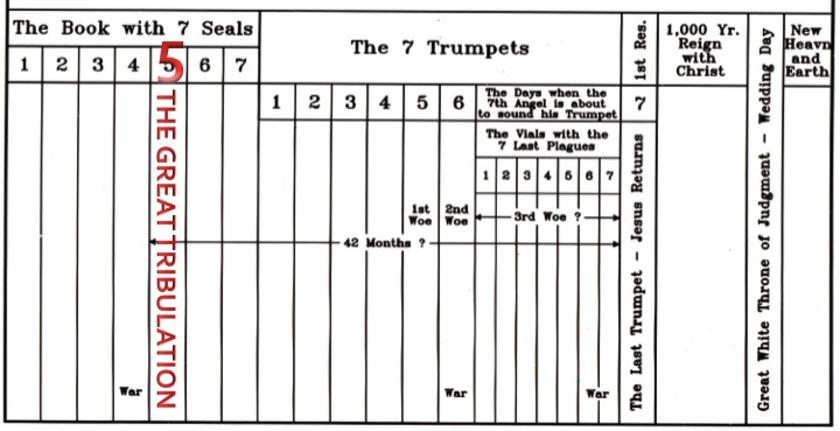 Revelation 6:12-17 12."And I looked when He (the Lamb) opened the Sixth Seal​, and there was a great earthquake; and the sun became black as sackcloth of hair and the whole moon became as blood;

13. and the stars of heaven fell to the earth, as a fig tree shaken by a great wind casteth her unripe figs.

14. And the sky was split apart like a scroll when rolled up; and every mountain and island were moved out of their places.

15. And the kings of the earth, and the great men and the chief captains, and the rich, and the strong, and everyone both bond and free, hid themselves into the caves and into the rocks of the mountains;

16. and they said to the mountains and to the rocks, fall on us, and hide us from the face of the one sitting on the throne, and from the wrath of the Lamb;

17. because the great day of their wrath has come; and who can stand? 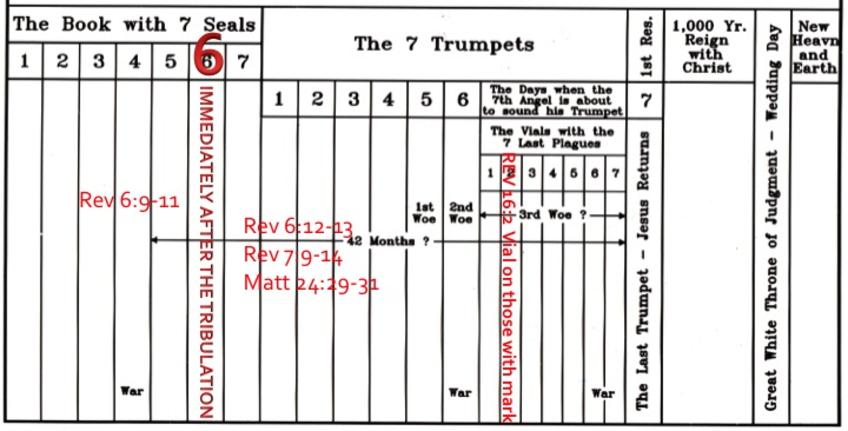 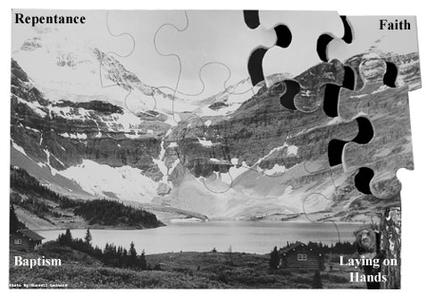 ​If you made a map of all the Middle East countries surrounding Israel, you would see a blue and white island (Israel), surrounded by an ocean of white, red, black and green flags.  Brian is the one who caught the fact that the 4th seal says a pale horse (Gr. chloros) chlorophyl in plants gives them a green color, not pale!

Revelation 6:9-11  9."And when He (The Lamb) opened the Fifth Seal, I saw underneath the altar the souls of those slain for the word (Gr. = logon) of God, and the testimony which they held;

10. and they cried with a great voice, saying, How long, Master, the Holy and True, will You refrain from judging and avenging our blood on those who dwell on the earth?

11. And to each of them was give a white robe and it was said to them, that they should rest up a little while longer until their fellow bondmen also and their brothers, who are to be killed even as they had been, would be fulfilled in number." 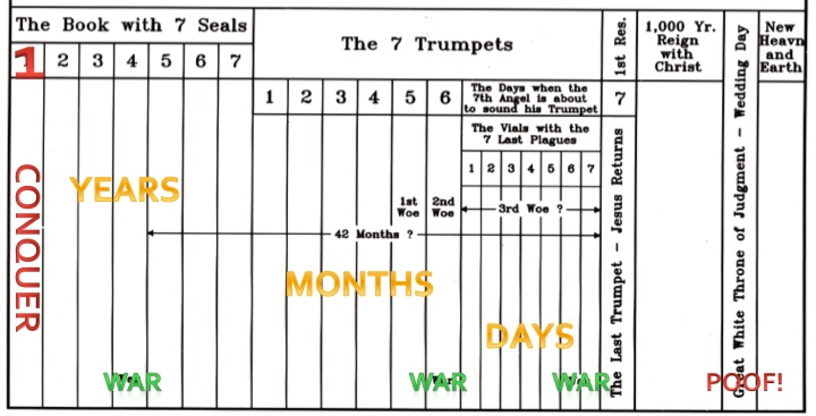 John 16:33 "These things I (Jesus speaking) have spoken unto you that in Me you might have peace, in the world you will have tribulation; but be of good cheer; for I have overcome the world."

Romans 8:37 "But in all these things, we are above being conquered through Him who loved us."  (Gr. upernikomen)

​The 4 Horses of the Apokalupsis - The Unveiling!

(This one from Andy's and my Bible Study Buddy - Brian Lange)

​​Revelation 6:7-8 7."And when He (the Lamb) opened the Fourth Seal, I heard the voice of the  fourth living being saying, Come.

8. And I saw and behold a green horse: and who sat on him was named Death; and hades followed with him.  And authority was given them over the fourth of the earth, to kill with sword, and with famine, and with death and by the beasts of the earth."

Revelation 6:1-2​ 1."And I saw the Lamb opened One of the 7 Seals, and I heard one of the four living beings (Cherubim Ezek. 10:18-20) saying as with a voice like thunder, Come.
2. And I saw and behold a white horse, and the one who sat on it had a bow; and a crown was given to him; and he came forth conquering and to conquer. 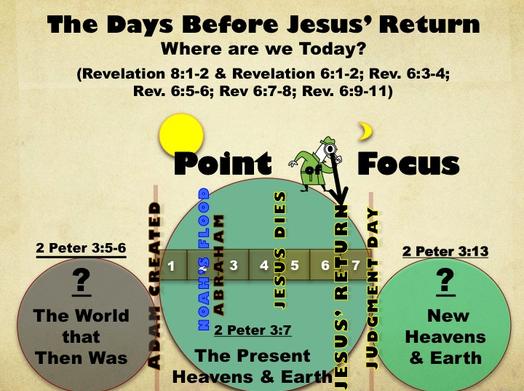 Continue
Back to Top

Revelation 2:7 & 11, 7. "Whoever has and ear, let him hear what the Spirit says to the Churches.  To him who overcomes: to him I will give to eat of the Tree of Life, which is in the Paradise of God."

Verse 11 He who has an ear let him hear what the Spirit says to the churches, He who overcomes will not be hurt by the second death"

Romans 8:18-25 ​"18. For I recon that the sufferings of the present season are not worthy to be compared with the coming glory to be revealed toward us.

19. For the earnest expectation of the creation awaits the revelation of the sons of God.

20. For the creation was subjected to vanity, not of its own will, but by the reason of Him who subjected it,

21. in hope that the creation itself also shall be freed from the bondage of corruption into the freedom of the glory of the children of God.

22. For we know that the whole creation groans and travails in pain together until now.

23. And not only so, but we ourselves also groan within ourselves, awaiting our adoption, the redemption of our body.

24. For in hope we were saved; but hope seen is not hope:  for who hopes for what he sees?

25. But if we hope for what do not see, we wait for it with patience.

Revelation 8:1-2​ 2."And when He opened the Seventh Seal, there was silence in heaven for about half an hour.

2. And I saw the seven angels that stand before God; and seven trumpets were given them. 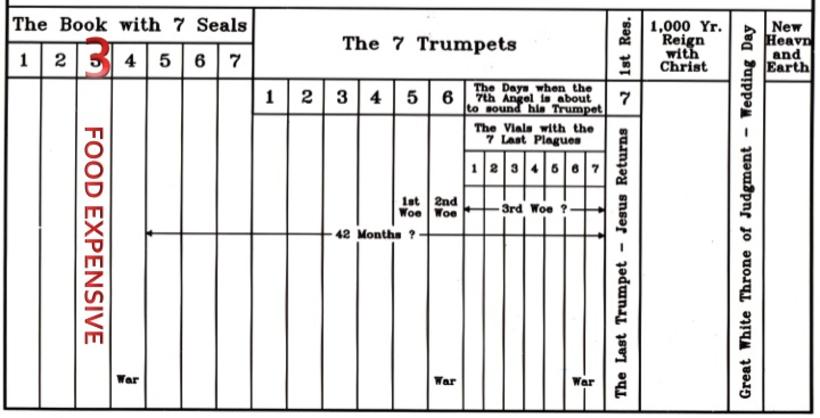 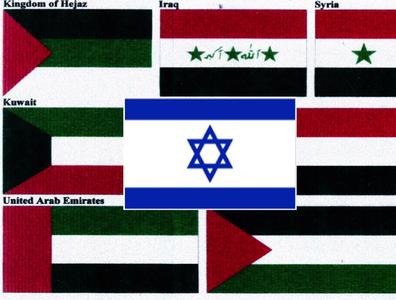 John 6:35 "Jesus said to them I Am the Bread of Life, he who comes to Me will in no wise hunger, and who believes in Me will never thirst."

Are the 4 colors of the 4 horses indicative of the colors of the flags of nations who will be involved in this great war followed by famine and plague and people acting like beasts?

What are the colors of Iran's flag and all others surrounding Israel? 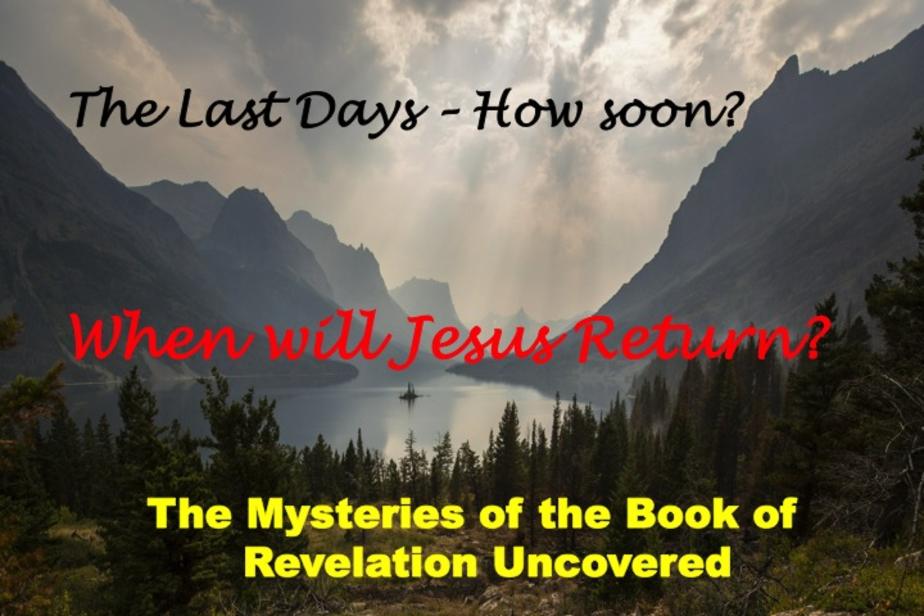