2. And it came to pass, as they journeyed from the east, that they found a plain in the land of Shinar (Babylon); and they dwelt there.

3. And they said to one another: Go let us make brick, and burn them thoroughly,  And they had brick for stone and slime for mortar.

4.  And they said:   Go to, "let us" build  us a city and a tower, whose top may reach to heaven;  and "let us" make us a name, lest we be scattered abroad upon the face of the whole earth.

5. And Yahweh came down to see the city and the tower, which the children of men had built.

6. And Yahweh said, Behold, the people are one, and they have all "One Language"; and this they begin to do; and now nothing will be restrained from them which they have "Imagined" to do.

Revelation 18:2 "...Fallen, fallen is Babylon the great!  She has become a dwelling place for demons, a haunt for every unclean spirit..."

Revelation 18:4 "Come out of her (Mystery Babylon, see vs.2)My people, and have no fellowship with her sins."

Revelation 18:21 "...Babylon the great city will be thrown down, and will be found no more at all."

Revelation 19:19-21 "19. And I saw the beast (the anti-christ), and the kings of the earth, and their armies, gathered to make war against Him that sat on the horse, and against His army.

20. And the beast was taken, and with him the false prophet that wrought the signs in his sight, where- with he deceived them that had received the "Mark of the Beast"​, and them that worshipped his image:  they both were cast alive into the lake of fire that burns with brimstone:

​21. And the rest were killed with the Horseman's sword, which came forth out of His mouth: and all the birds were filled with their flesh."

Revelation 20:1-3 "1. And I saw an angel coming down out of the heaven, having the key of the abyss and a great chain over his hand.

3. And cast him into the abyss, and shut it, and sealed it over him, that he should not deceive the nations no more, until the thousand years should be finished:  thereafter he must be loosed for a little season." 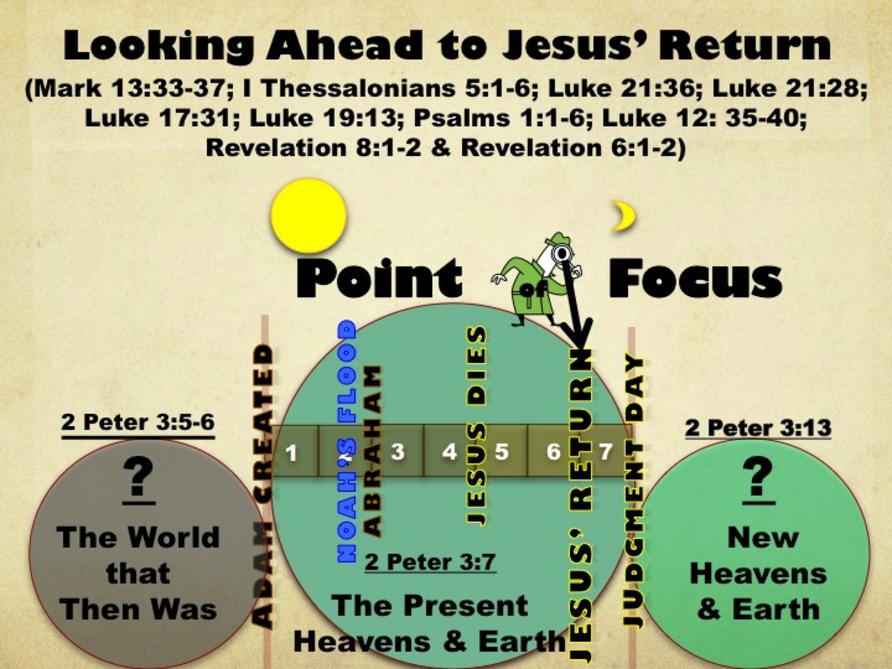 ​​​ORDER OF SEQUENCE OF EVENTS

​1. The New Testament Age
Begins @ Jesus' death on the cross

(like in Gen 11:1-9 from Adam until after Noah)!  Begins @ the 1st Resurrection!
a.  Only One Language in the Whole Earth, like from Adam til after Noah's Flood!

j.  Jesus will Reign in Mount Zion forever and ever!     *Micah 4:6
Ends with the Judgment Day - Present heavens and earth destroyed by Fire 2 Pe. 3:10

​
3. The New Heavens and New Earth,   Begins @ the Judgment Day, &
​The Wedding of the Lamb
a. God the Father and Jesus will be our Tabernacle
b. Every tear wiped away
c. No Death!!!
d. 1st Heaven and Earth destroyed
e. No Sea
f. No Crying
g. No Pain
h. New Jerusalem will be our dwelling place for those found written in the

Luke 19:13​  "And He called 10 of His bondmen and gave them 10 pounds and said to them: Be Pragmatic = Be Active in the Lord's affairs Until I Return."  (Note:  the Greek word used here is pragmateusasthe)

34. It is as when a man, goes on a journey in another country, having left his house, and giving authority to his servants, to each his task, also Commanding the door keeper to Watch.

​35. Therefore Be Watchful, for you do not know when the Lord of the house comes, whether at midnight, or when the rooster crows, or in the morning.

36. Lest coming suddenly He find you sleeping.

Putting the Puzzle
Pieces Together

I Thessalonians 5:1-6​ 1."But concerning the times and the seasons, brethren, you have no need that anything be written unto you.

2. For you yourselves know full well that the Day of the Lord comes like a thief in the night.

​3. But when they are saying, Peace and Safety, then sudden destruction comes upon them, as labor pains upon the one with child; and they will not escape.

4. But you, brethren, are not in darkness, that the day should overtake you as thieves,

5. for you are all sons of light, sons of the day, we are not of of the night, nor of darkness.

6. So then let us not sleep, as the rest, but let us Watch and be Sober ​(salvation minded!)

Revelation 8:1-2 1."And when He opened the 7th Seal, there was silence in heaven for about half an hour.

2. And I saw the 7 angels that stand before God: and 7 Trumpets were given them." 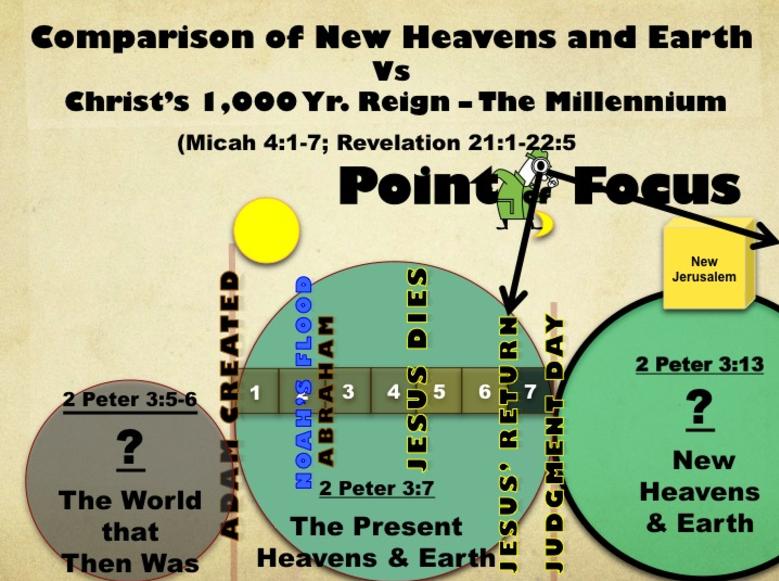 Luke 21:28​  "But when these things begin to take place, Look Up; because your redemption is drawing near."

Let's change our point of view, and begin to focus on,

How to be Prepared for these Last Days

before Jesus Returns - the 1st Resurrection!

​*Jesus is a compound word from Yahweh + Salvation

31. On that day, the one who is on the housetop and whose goods are in the house, let him not go down to take them out, and let him who is in the field in like manner, Not Return Back."

Psalms 1:1-6​  1."How Happy is the man who has not walked in the counsel of the lawless, and has not stood in the way of sinners, and has not sat in the seat of scoffers.

2. but his delight is in the law of Yahweh, and in His law he talks with himself day and night.

3. So he does become like a tree planted by streams of waters, that yields its fruit in its season, whose leaf also does not wither, and in whatever he does he prospers.

​4. But the lawless are not so, they are like the chaff which the wind drives away.

​5. For this reason the lawless will not stand in the judgment, nor sinners in the assembly of the righteous.

36. and be like men waiting for their master, when he returns from the marriage feast that when he comes and knocks they may immediately open to him.

37. Happy are those bondservants, whom when the master comes, shall find them watching: Amen I say unto you that he will gird himself and make them sit down and come and serve them.

38. And if he will come in the second watch and if in the third and finds them so, happy are those servants.

39. But know this, that if the master of the house had known in what hour the thief was coming, he would have watched, and not have left his house to be broken into.

2. And I saw and behold a white horse, and the one who sat on it had a bow; and a crown was given to him; and he came forth conquering and to conquer.

Luke 21:36 ​ "But Watch at every season, (and pray), Making Supplication, that you may prevail to escape all these things that will come to pass, and to stand before the Son of Man, (Jesus)." 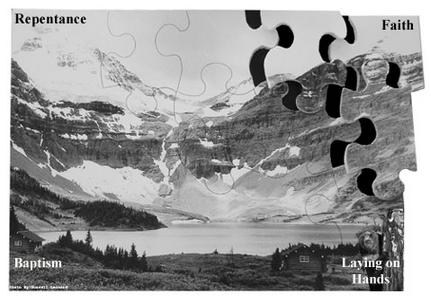 Micah 4:1-7​ "1. But in the Last Days, it shall come to pass that the mountain of the house of the YAHWEH shall be established in the top of the mountains, and it shall be exalted above the hills and people shall flow unto it.

2. And many nations shall come, and say, Come let us go up to the mountain of the YAHWEH, and to the house of the God of Jacob, and He will teach us of His ways, and we will walk in His paths:  for the law shall go forth of Zion, and the word of the Yahweh from Jerusalem.

3. And He shall judge among many people, and rebuke strong nations afar off; and *they shall beat their swords into plowshares and their spears into pruning hooks, nation shall not lift up sword against nation, neither shall they learn war any more.

4. But they shall sit every man under his vine and under his fig tree, and *none shall make them afraid: for the mouth of YAHWEH of Hosts hath spoken it.

6. In that day, says Yahweh, I will assemble the lame, and I will gather those who have been driven out, and those whom I have afflicted.

7. And I will make the lame, a remnant, and the cast out, a strong nation and *Jesus (Yahweh is Salvation), will reign over them in Mount Zion from this time forth and forever." 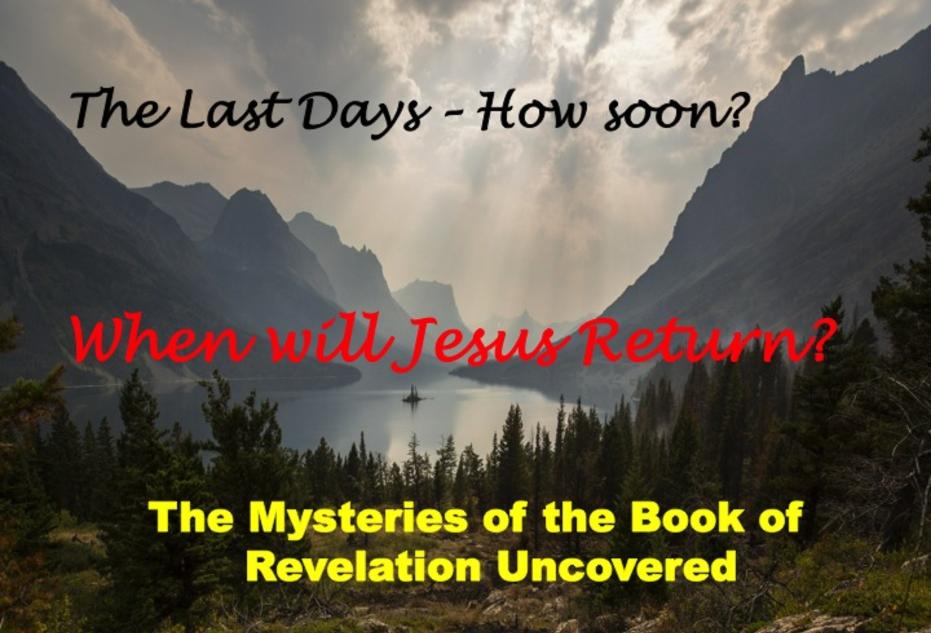